In 2012, I had the opportunity to help with a feature film production and to support Celia in making her dream come true.

“When running away brings you back…” (Celia McBride).

Last Stop for Miles is a feature film about a women (January – Claire Ness) who witnesses the murder of her best friend (Kee – Angela Code). January blames herself for the tragic outcome. She goes into a spiral of self-destruction.

January deals with her shame by drinking and screwing her way across nameless highways, choosing random destinations by throwing a pocket map in the air and pressing her finger to the first place it lands at.

The film opens when January picks Whitehorse, Yukon, where Kees ex-boyfriend, Thomson – (Kelvin Smoler), lives. A coincidence brings January and Thomson together and they become intimate. Their doomed love affair, along with numerous serendipitous encounters with a variety of colourful characters, forces January to reconcile her past mistakes, stop running and take steps toward changing her life.

This is a realistic film about a woman who is wounded and scared and as a result is choosing a self-destructive path to cope with life. She is living in the darkness. But this is also a film about hope. January finds a way to overcome her shame and walk into the light. Last Stop for Miles will inspire you. It is a story that will lift up your heart. (from IndieGoGo)

Celia wrote the first version of a play twenty years ago while at the National Theatre School. Ten years ago, she was encouraged to transform it into a movie script. Then she was able to produce a short from it. This year, after many set backs, she was able to actually realize the project of directing her first feature film. I am honoured to be part of the effort. I offered Celia to take care of the first aid and catering needs on the set as my contribution. In the end, with a steady crew of four, with more than a dozen actors and dozens of extras on almost twenty locations, there were many other roles I was able to help out with despite my lack of experience in the film industry.

Celia has set up a webpage and a facebook page through which you can follow the progress of the film production. During the shoot, I was able to do still photography and some featurette-type video. There is a selection of my pictures posted on Celia’s facebook page. You can also find the movie clip “Director’s Chair” on that page. It was a fun side product of being part of the very small crew.

The work on the film production was also featured on episode 5 of North of Ordinary, a TV production by Northwestel Community TV (Channel 9) and North of Ordinary Magazine. After two minutes of the show, there is a segment about Last Stop for Miles.

I enjoyed the experience and was motivated to write a news article to promote the ongoing film production and to recognize to generous and heartfelt contributions many people were making. To see and read who else was working and contributing to this film production, see the following credits page.

We love you, Pong!

“We love you, Pong! We really frickin’ love you!” the young waitress shouts at the cook during her break outside Green Garden Restaurant where she works.

The line is from the script entitled “Last Stop”, the feature-length movie written and directed by Celia McBride and currently being shot in locations all around Whitehorse.

Local talent Angela Code, Claire Ness, and Winluck Wong are the actors taking part in the above scene but the short line seems to be resonating far beyond its place in the film.

Celia McBride had the inspiration for this movie project many years ago. When a large portion of the funding was withdrawn a few months ago, the project had to undergo some major changes. The movie is now being produced as a community art project with minimal funding.

The reliance on volunteers and the goodwill of the community is one of the key features of the project. The shoot taking place at the Green Garden Restaurant on Day 4 exemplifies the community-oriented approach with 20 extras on the set and unpaid volunteers doing the crewing. Ken Choi opened his local business 4 hours early to accommodate the film crew and their needs.

Mr. Choi also got his 15-minutes of fame as the double for Winluck Wong, who plays the character of Pong. The two men were virtual clones in their chef’s hats and aprons. Mr. Choi took pride in teaching Wong the basics of Chinese cuisine. Scene-after-scene, he accepted with gracious aplomb the many interferences to his day-to-day operations, even as the shoot went overtime and the restaurant had to open for daily business.

As the shooting took place, Ken Choi really got into his role. He became very enthusiastic about being an extra in the kitchen. When McBride was looking for a more dynamic look in the background of one of the scenes, she gave instructions to Ken to “walk back and forth more in the kitchen”. On the next take – camera ready – sound ready – and “Action” – the scene began to unfold. The sounds coming from the kitchen resembled those at concert of a steel drum band – a new and surprising effect. “Cut”!

Ken was doing what he knows best: He used the ‘wok more in the kitchen’. This is the priceless beauty of a community art project. People open their doors and their hearts. They make great things possible that would cost a lot more money down in Hollywood.

“We love you, Pong! We really love you!”

I am still contemplating on the idea of creating some more featurette-style movie clips with the material I recorded during the 15 days on location. One day, I will have a creative streak again! 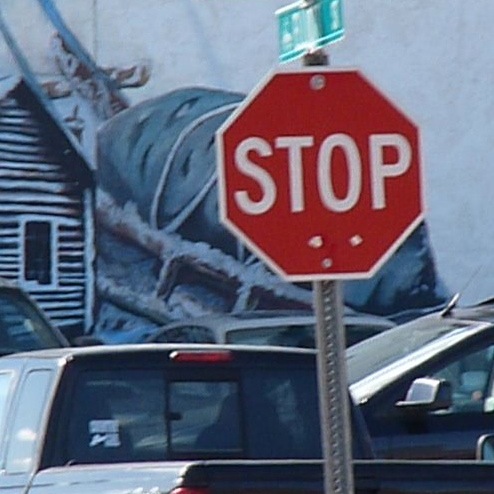 2 thoughts on “Last Stop for Miles”