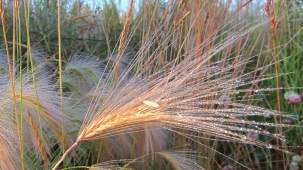 Glimpse of the Universe

Here is my 2012 in pictures! For thoughts to go with each picture in the slideshow, keep reading:

Welcome to the short review of another eventful year!

I have an old habit to always cook more than for the number of people expected at the table. Some years ago, I would even set an extra plate for the unexpected guest that could arrive anytime. The refectory in the monastery of Rapperswil, where I spent a week in 2012, and where I will retreat for three months during my 2013 pilgrimage, is well equipped to receive and host the unannounced visitor and the ever changing community. Abundance in poverty, openness in separation.

The decorative sides of a harsh climate. The early winter of 2012 in the Yukon was marked by prolonged periods of temperatures below seasonal average. At the same time, above average precipitation helped to set the conditions for these snow sculptures that added their own touch to otherwise familiar and predictable places called home.

Wild barley with the early morning dew after a late summer frost in Whitehorse. I was out for a walk in a reclaimed gravel pit with the dogs I was looking after as a house sitter at the time when I spotted this sight. The sun just came up and the first rays started to melt the frost on the plants. Pioneer plant have always fascinated me: They make the best with what they have in the most marginalized of environments, a trait that I like to cultivate.

I see many shapes and forms when I am walking. This early summer 2012 picture from the Leimen valley in Switzerland shows intense and contrasting colours and geometrical shapes in an organic landscape. Would it be possible to find similar beauty in an industrial monoculture? For me it is a metaphor for the beauty of cross-cultural societies and their synergistic co-existance in a world that seems more and more driven towards dominance by a post-post modern, superficial but glittery, imitation of a universal lookalike culture.

After four days of foghorns from the passing ships and landing ferries, this view opened up at the ned of a four-day silent retreat near Vesuvius on Salt Spring Island in fall 2012. The sun is about to set behind Vancouver Island. The intensity of the Light is what I am seeking in my encounters with people and the world. 2012 has been a rewarding year in that regard.

The journey of looking for the roots is about questioning the taken for granted. This artistically shaped rock face in a quarry near the Etzel pass in Switzerland is an expression of solidity. Several centuries ago, this rock was harvested to construct buildings that would last for generations. They were carefully chosen, processed, and used with the intent of purposeful service for eternity. For me, today’s production of goods is guided by the opposite: planned obsolence for quick turnover of profit cycles. I came across this abandoned quarry not far from a section of the way of St. James on a “desert day” hike in June 2012, when the task was to walk in silence for a day without a planned itinerary – simply following the ways that open up for me in the moment.

A road scene under the midnight sun. I chose the picture with its stark contrasts of rain and shine, light and dark, nature and technology as a memory of my transient way of life during 2012, without permanent residence, always visiting somewhere, and moving on the path of life. The picture was taken on the Haines Road on the edge of Kluane National Park near Kathleen Lake during a guiding trip, during which I was able to help others experience the glory of God’s creation in an unexpected way.

My first title for that picture was “Fish Farm”. Farming is one of the strong memories in my life. And it is a form of resistance against the industrialization of food production. The association between fish farming – a controversial practice on Canada’s West Coast because of its industrial form and lack of stewardship for the ecosystems – and the wastefulness of our consumerist consumption habits that fuel the industrial process gave this picture, taken in fall 2012 on Salt Spring Island, multiple layers of meaning.

One of my goals in life is to establish a home base once more. The pilgrimage is part of the journey to get there. So was the construction of the passive solar architecture tiny house during the summer of 2012.

Doing things in this world are not primarily actions of self-actualization in the sense of achievement and hedonistic reward. I practice to become and to be a part of a larger whole. Just like the coot tending its hatchlings in a selfless pursuit of meeting the needs of others that have not the privilege, skill, or power, I want to contribute to the human becoming of people on the margins by facilitating the unfolding of their potential rather than prescribing the best way to become like us.

A totally random picture taken on location during the filming of “Last Stop for Miles” in August 2012. In the parking lot of a motel was that big sign advertising for the various services and products offered in a bland and uninspiring way. But it is one of my practices that I practiced and developed further in 2012  to see beyond the woundedness of secular, to find the essence of even the most unassuming things, to encounter the divine spark in each and every person. The [C]old Bee[r, Wine &] Spirit[s] slide is representing that for me.