For an English translation, see below.

END_OF_DOCUMENT_TOKEN_TO_BE_REPLACED

When I think about the extent of misery I described in “Mapping it out”, there are many questions that come up for me:

When is this misery, this crisis going to end? This statement implies where we generally see the problem: The misery of “poverty amidst prosperity” seems to be the apparent problem that needs to be addressed. Why else would we find evidence of hundreds of charities and social services initiatives, both from the public and the private sector in Kensington?

Poverty is not the problem – Affluence is!

The early church fathers (5th century) have formulated it this way: “Some people are indigent for the very reason that others hold a superfluity. Take away the rich man and you will find no pauper. No one should own more than is necessary but everyone should have what they need. A few rich people are the reason why there are so many poor” (Pelagius, as cited by Wallis, p.116)

There is nothing wrong with wealth in its original meaning of the word: Being well. But affluence has nothing to do with well-being.

Affluence in the United States refers to an individual’s or household’s state of being in an economically favorable position in contrast to a given reference group.” (Wikipedia)

Jim Wallis describes how that dynamic of maneuvering into a favourable position for individuals, households, or corporations has led to a rat race that is ultimately destructive for the world. We seem to have lost some old fashioned values, like the concern for the common good. It is a sense of individual entitlement (“it’s all about me!”), and the instant gratification of wants (“and I want it now!”) that has taken over.

And we are not satisfied if we have all we need: The consumerist discourse suggests that we need to compete and get ahead of everybody else. Keeping up with the Joneses is one of the symptoms of affluenza, a non-medical disease that has become widespread in affluent societies:

Af-flu-en-za n. 1. The bloated, sluggish and unfulfilled feeling that results from efforts to keep up with the Joneses. 2. An epidemic of stress, overwork, waste and indebtedness caused by dogged pursuit of the American Dream. 3. An unsustainable addiction to economic growth.”(http://www.pbs.org/kcts/affluenza/)

Wallis describes how the market has become like a god. It is all-powerful, all-knowing, and all-present. We have subjected ourselves to the power of the market forces to the point where we start realizing and suffering from the symptoms of affluenza: This unfulfilled feeling.

However, the market does not give you the comfort of the divine. It is not all-loving. If we feel unfulfilled, the market will produce yet another consumable for us and will give us the promise that everything will be taken care of. It sounds like providence

Kensington is a prime example of the hollowness of that market providence. It is not meant to be shared among all human beings. It is not meant to be shared for the sustained well-being of all of creation. Most of us are aware that natural resources are limited. We have made everything on this planet and beyond a commodity that can be exploited for short term gain. Few decisions are driven by the concern of the seventh generation from now.

A perpetual and unregulated growth society needs millions of impoverished and middle-class people that sacrifice themselves and contribute to the extreme accumulation of wealth by a few. Wallis gives stunning examples of the growing gap between the rich and the rest in America and the world. The 400 wealthiest people in the United States control more assets than the 160,000,000 people at the bottom end of the wealth spectrum together!

And the gap is widening every year. That is why I am convinced that poverty is not the problem. Once we rediscover that we are happier with less, and that we are all in this together, we will be heading towards a state of providence. If we redesign our economy and polity, as an expression of the divine will, there will be enough to meet the needs of every human being.

In the meantime, the self-proclaimed “road to providence by perpetual and unlimited growth and consumption” is indeed a DEAD END. It has led to the financial collapse of recent years, and it will lead to further crises and catastrophes down the road.

Unless we decide to plan for de-growth and create a culture of sharing, we will have to ask ourselves again and again: when will this misery going to end? Wallis suggests that we better start with the question: “How is this crisis going to change me?” 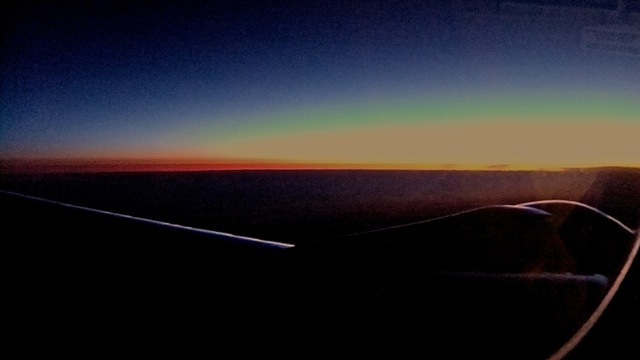 Thanks to Air North, Yukon’s Airline, I experienced this spectacular sunrise over the endless mountainous expanse of boreal forest in Canada’s North.

The early start today was refreshing. On my way to the airport, a bright setting moon was guiding me up the stair master at the end of Black Street. A faint display of northern lights covering my back. I arrived at the check-in counter at YXY with icicles hanging off my moustache and steam rising from beneath my jacket.
I feel fit for the pilgrimage, the mind cleared of many attachments to place already. It was a strange initial feeling when I turned off and put away the cell phone before locking up Celia’s apartment and depositing the key for the house-sitter. It was like shedding layers of security. But, I got a sleeping bag, some clothes, some privilege and financial means, and a whole lot of confidence in providence!

Ready for take off!

Ready for take off!